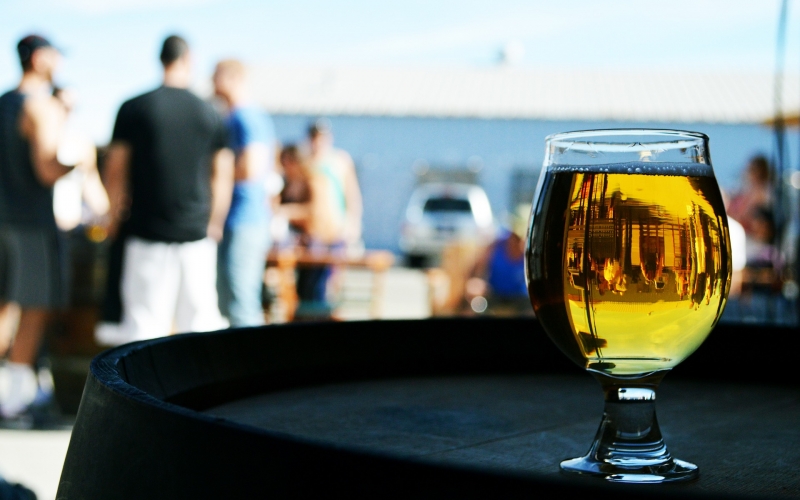 A craft beer festival is an event when beer lovers gather together to celebrate their love of beer. They often have food trucks and/or vendors, live music, entertainment, and, sometimes, even special activities for children. Cities all over the United States have craft beer festivals, but it takes something unique to make those festivals special. Here’s a list of the best beer festivals in America:

Where the Wild Beers Are

In October in Minneapolis, Minnesota, twenty dollars will get a person a one-of-a-kind piece of the beer sphere at this friendly, relaxed, and fun event. The focus of this beer festival is on wild, sour, and farmhouse beers. It takes place at the Republic 7 Corners gastropub. What makes this festival unique is that it basically a beer share. Every person that is in attendance has to bring up to three bottles of commercially made sour or wild beer to share.

More info about Where the Wild Beers Are »

This festival is held annually in Hood River, Oregon in September. They have held twelve festivals over the years. It spotlights local hops and includes sixty fresh-hop beers that come from forty breweries. A fifteen dollar beer garden ticket comes with admission, a commemorative glass mug, and five 3.5-ounce beer tastes. For fifty dollars, a person will get a commemorative glass mug, a ticket to the Painted Hills Beef Bar (where they get to eat grass-fed beef sliders), and access to the Official Hops Fest Brewers Tent to taste fifteen 3.5-ounce size beers. During the entire beer festival, there is live music as well as arts and crafts for sale.

In October in Milwaukee, this city combines the two things that they are best known for: beer and Harley-Davidson motorcycles. This event takes place at the Harley-Davidson museum. On Friday evening, Saturday afternoon, and Saturday evening, there are four-and-a-half hour tasting sessions. These sessions cost eighty-five dollars a piece. Forty dollars will allow a person to be part of one of eight fifty-minute seminars about beer taught by authors and experts. About 150 craft beers and ciders are on tap from local breweries.

The Good Brew Festival takes place in October in Salisbury, Maryland. They offer the traditional beer festival events: beer sampling, live music, talks by brewing companies, and food and wares for sale by vendors. What makes this festival stand out from the rest is the activities provided. The activities and games provided for guests entertainment is Cornhole, Wall Hooky, Bear Pong (an oversized beer pong), Giant Jenga, and life-sized football. Sports fans can also watch the weekend’s games on big screen televisions.

Every June in Loring Park, Minneapolis hosts its annual beer festival. One unique thing about this event is that they pair the food that their food vendors sell with the beers they have available for sampling. During the festival this year, the over fifty participating breweries will each serve special, one-off or infused beers that celebrate and pay homage to the icons and advocates from the LGBT community that have had a large part in bringing awareness to critical issues in the community like marriage equality and trans-phobia. Along with the beer tastings, they provide some one-of- kind entertainment. To make this beer tasting event more pleasant, a lady choir will sing, a dance band will perform, and there is also a silent disco.

The Ballpark Ale Fest is held every June in Love Park, Illinois. This event combines America’s favorite pastime (baseball) with Illinois craft beers. This festival features more than forty one-of-a-kind beers, great food, and live music. The mission of this festival is to showcase Illinois craft beer with an emphasis on local and regional craft brewers. The combination of baseball and beer makes this an event that is truly unique.

Murphy, TX hosts the Murphy Craft Beer Festival with activities and events for all ages every May. Along with over 150 beers to try, a canned beer garden, and live music, there is special food being served and a Kid Zone activity area. They have a crawfish boil (that is available until it is all gone) and food trucks that sell all different types of food. The kid zone has games, bounce houses, entertainers, face painting, and a root beer tasting challenge. The motto for this event is, “Tunes, Tails, and Ales,” which is a great summary of what this day is all about… along with fun activities for the children!

Asheville, North Carolina is excited to be hosting its annual beer festival each September. It is North Carolina’s original beer festival. Over fifty-five breweries will sample a great variety of local, regional, and national craft beers. What makes this one of the best beer festivals is that they are proud to donate a portion of all proceeds to Big Brothers and Big Sisters of Western North Carolina. This charity helps children ages six-fourteen of single parent families have an adult mentor in their lives.

More info about the Brewgrass Festival »

This great beer festival takes place in Denver, Colorado in October. They provide a variety of beers from breweries all around the country. The Homebrew Marketplace has information for those interested in the hobby of homebrewing. They also have a lot of festival merchandise for sale (including a beer bookstore) and a beer competition. Festival guests can also join the American Homebrewers Association. At the sustainability pavilion, people can learn about making their businesses environmentally friendly. A person can also visit the Support Your Local Brewery Pavilion and there are a lot of vendors telling about their businesses and selling their wares. The Beer X Craft Experience gives festival visitors the opportunity to actively participate in using brew ingredients hands on, sip beer and talk to the brewers, and talk to the judges of the beer competition. The other events that make this one of the best beer festivals are the beer and food pairings, the silent disco, and the designated driver lounge.

Every July in Portland, Oregon, one of the nation’s longest running beer festivals takes place. 80,000 beer lovers come to Oregon to try over eighty independent craft beers, be entertained by a variety of bands, eat delicious food, and purchase items from a variety of vendors. What makes this craft beer festival unique is beer memorabilia displays and a root beer garden for minors and designated drivers.

Every year in June, the Firestone Walker Invitational Beer takes place in Paso Robles, California. The visitors to this festival get domestic and international beer tastings, food from restaurants on the Central Coast, and to hear live bands. This beer festival stands out from the rest because the guests get free parking, a commemorative glass, one-on-one beer tastings and talks with the brewers, and the proceeds go to the Pioneer Day charity.

No matter what craft beer festival you go to, with all the beer and fun that they provide, you should find that they can cure what “ales” you.