The beer wars have entered another phase of action, with Budweiser recently announcing that it was seeking permission to re-label its beer as “America” for the duration of the U.S. election season. In what can only be deemed to be a gimmick to draw market share away from craft beer, which has become a fierce competitor, the company is making it clear it has dedicated itself to finding new ways to get consumers’ attention.

Over recent years, Big Beer sales numbers have taken a beating, as craft beers come to the notice of consumers. The decline in sales numbers have been particularly severe with millennials, who prefer the distinctive flavors and aromas of craft offerings. In addition, Budweiser has battled a bad image as one of the lower quality beers on the market. While the company thought the recent recession and other economic factors were affecting their sales, craft beer was coming in to fill the gap, with young people choosing to spend their hard-earned dollars on a more flavorful, high-quality products. Budweiser’s market share was down to 8.7 percent in 2013, down from 14.3 percent in 2005.

In response to the declining numbers, the company resolved to take on other producers, as well as the craft beer industry, increasing sales and marketing budgets by 9 percent. So far, the company’s efforts have been in vain. By the 4th quarter of 2015, revenues were down another 10 percent, causing the company to look at new marketing efforts to boost sales numbers. 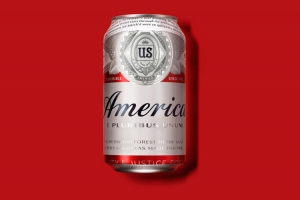 Budweiser wants to call its beer “America” during the 2016 US presidential race.

The Leuve, Belgium based company has chosen to use the current election season to heavily market its beer with the temporary “America” brand. Perhaps, this choice is an attempt to ride the coattails of Republican presumptive nominee Donald Trump with his “Make America Great Again” slogan. Or perhaps, they feel the election itself will provoke renewed patriotic feelings sufficient to boost their sales. Budweiser has offered American themed cans and bottles in the summer months before without significant interest. This time, they will add words from the Pledge of Allegiance and lines from the Star Spangled Banner along with the name change. Whatever the thinking behind the new name and marketing campaign, the move has already put the company in the news and has created renewed awareness in the public consciousness.

Whether this move is a sign that Big Beer intends to offer more seasonal promotions of its products, much like McDonald’s offers McRib sandwiches, will be interesting to see. It’s unlikely to affect the wide popularity of craft beer.