Choice is no problem for today’s beer consumer. If each brewery in the United States brewed six different beers, there would be nearly 25,000 craft beers to choose from. Take into account the number of beer styles, and varieties within each style (West Coast IPA vs. a Vermont IPA, for example), the variety becomes almost overwhelming. To take things a step further, some of the nation’s breweries are responding to the constant demand for new products and tastes with hard soda.

What is Craft Hard Soda?

A distinction should be made between blended hard soda and fermented hard soda. Blended versions are conventional soda with some booze mixed in. All that is required to make blended hard soda is mixing vats, buckets of flavorings, and a tank of booze (normally malt liquor) to mix in. Other than the carbonation, manufacturing blended hard soda works the same way as making a bowl of that stuff that college freshmen gulp down at orientation week parties, often to ill effect. A leader in this category is Spiked Seltzer with its various flavors. While it might be tasty, this category is the cultural progeny of the ill-fated Four Loco.

Fermented hard soda can be considered a variant of craft beer, depending on yeast and the same complex blending of flavors that happens in the brewing process. One of the earliest examples of this is Thomas Kemper Root Beer, which two brewers debuted as an Oktoberfest in Paulsboro, Washington in 1990. True, it’s not an alcoholic beverage, but that was a choice made by these brewers. Andy Thomas is currently the CEO of Craft Brew Alliance, and Will Kemper is currently making very nice European style beers as the owner of Chuckanut Brewery in Bellingham, WA. Traditional soda is a low-alcohol fermented beverage, but it’s not that difficult to increase the alcohol level by adjusting the fermentation time and amount of fermentable sugars. 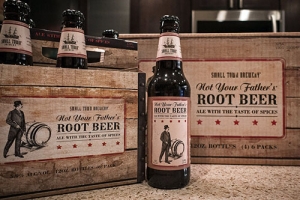 Craft Hard Soda is a left-field success in the craft beer market. After the rollout of Not Your Father’s Root Beer, hard soda appears to be here to stay.

Small Town Brewery in Wauconda, IL, largely kicked off the current interest in hard soda with Not Your Father’s Root Beer. Small Town doesn’t think of their products as sodas, but rather as gruits. Gruit beers were common in Europe leading up to the 16th century, and relied on herbs for bittering rather than hops. When the Reinheitsgebot (the “German Beer Purity Law”) was enacted in 1516, it banned the use of anything other than hops for bittering beer and effectively ended the brewing of the gruits in the region.

The craft beer movement has succeeded in creating new consumables and resurrecting old ones, including beers that were once lost to time. The hard soft drink expansion is not simply pouring alcohol into soda but is further filling in the space of what is possible to brew.

To explore these brews, start with one created by a craft brewery, such as Small Town. Other notable craft hard sodas include: