The popularity of India Pale Ales (IPAs) and the growth of marijuana legalization has brought some intriguing developments. Craft beer IPAs are known for being heavy on the hops, and as it happens hops and cannabis are closely related plants. 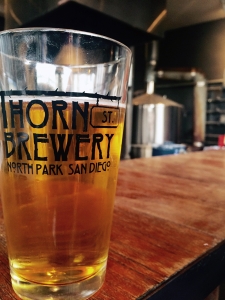 Cannabis Now Magazine is reporting that award-winning Thorn Street Brewery of San Diego has begun using cannabis terpenes to add unique flavor and aromas to their new pale ale product. Terpenes are compounds found in many plants–including hops and cannabis–that can combine to form complex tastes and odors.

Brewers have been combining different hops for different flavors and aromas for many years. Cannabis oils high in tetrahydrocannabinol (THC) have been used for “highs” via such means as vaporizers, but Jetty Extracts has found a method to distill the terpenes out of the cannabis to produce oils that could be used solely for flavor and aroma (though the THC could be reintroduced to give the beer an extra kick).

Thorn Street Brewery is using it to add a pot aspect to their aptly named OG HighPA beer. Thorn Street distributes to over 100 accounts in Southern California and is hoping to expand production pending the approval of the Alcohol and Tobacco Tax and Trade Bureau. This government agency controls what ingredients may be used in commercial beers.

While the Jetty extract used contains no THC, there is some concern about the legalization of cannabis products for use in beer. In those states where cannabis is legalized, will a THC-rich additive be legal as well? What effect will a beverage containing both alcohol (OG HighPA contains 4.2%) and marijuana have on the party scene and its safety and social issues?

The Future of Marijuana and Brewing

It’s not a concern just yet. We have to wait firstly for the TTB to give its approval and secondly to see whether pot-flavored ale will have a sustainable market once the novelty wears off.

Even if it does, that doesn’t mean the TTB would approve the THC extracts. But the popularity of craft beer and the momentum for legalizing marijuana have been on the rise for years. Should THC-laced beer become legal in certain states, the rest of the country will be waiting with baited breath to find out the real allure, and risks, of a brew with the double punch of alcohol and THC.