Pabst Blue Ribbon will be returning home this summer to the Midwest in Milwaukee where the brewery began in 1844. The new Pabst Brewery will open in their former home that was converted from a former Methodist church in the 1890’s.

Including a tasting room, beer garden, restaurant, and microbrewery, the complex will be open to tours and will have a focus on the company’s history and new craft beer recipes. All of the new recipes will be redesigns of Frederick Pabst and Jacob Best’s original recipes when they founded PBR.

The original Pabst neon sign is relit for the first time since 1996. Local residents have always seen the brewery has a monumental part of local culture and considered using communal funds to purchase it in 2011. Luckily for them, Pabst was purchased by a new owner who wants to bring the brand and company back to its Midwestern heritage. 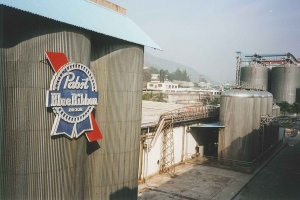 Pabst Blue Ribbon has announced the opening of a new brewery. The New Pabst Brewery will open in Milwaukee, WI, where the brewery began in 1844.

The brewers will cull through the company’s history to restore recipes and to create new craft beers. The blue collar Midwestern classics that make the company so popular and beloved will also be on tap.

Pabst’s name evolved from Best Select, named after founder Jacob Best to Pabst Select after Frederick Pabst, nephew and eventual investor in the brewery. From 1882 – 1950, the beer was known for its distinct blue silk ribbon tied around its bottle’s neck. Along with other American companies, Pabst paused its silk usage to provide silk to make silk parachutes for the war.

Jack Best founded The Pabst Brewing Company in 1844, which would become America’s largest brewing company by 1866, a title Pabst still proudly holds. Opening as The Empire Brewery in Wisconsin, Best ran the brewery as a family company with his sons. Best’s oldest son, Phillip, took over the company from his father and brought on his uncle, Frederick Pabst to create the company and recipes we now know and love.

The company’s only pause in beer production was during Prohibition when Pabst became a cheese producer and sold Pabst-ett cheese. American company Kraft purchased the cheese line when Prohibition ended and Pabst returned to brewing.

The redesign of the complex will bring back the life of the brewery. Before the original Pabst brewery was closed in 1996, visitors flocked to the area for tours and to enjoy the endless flow of beer at the Sternewirt Pub. Local university students at the University of Wisconsin and Marquette University were regulars and were a part of the lively spirit for tourists who came to see and experience the quintessential Midwestern beer and hospitality.

Pabst Blue Ribbon plans on building breweries in more cities if the new brewery complex is successful. To gear up for the opening, Pabst will begin slowly rolling out the pre-Prohibition and post-Prohibition legacy recipes.

Old Tankard Ale became available on draft in small craft breweries and in four packs in locally focused beer shops last fall in Wisconsin, Minnesota, Illinois, Michigan, and Indiana. As the first canned craft beer in America, Old Tankard Ale was also Pabst’s first craft beer. The recipe is from a 1937 log when the ale first reached its popularity as the second most popular beer in the country.

Old Tankard Ale will be rolled out nationwide this early summer as Pabst begins to release their legacy brands and recipes. Building a fan base for the classics will be key in the company’s refocus to its Midwestern history and roots.