It’s no secret that the craft beer industry is booming and not showing any signs of stopping. This year craft brewers reported a 13 percent increase in volume which marks the eighth consecutive year of double-digit growth. With 4,269 breweries in operation, more than ever before, the smaller brewers are giving the big companies like Anheuser-Busch InBev and MillerCoors a run for their money. Premiumization, the industry term for the idea that customers are willing to spend more money on higher quality items, is the primary driving force behind the craft brew boom. With the fuller flavor IPAs driving the market, breweries big and small are looking for new ways to take advantage of this lucrative market while keeping profits high.

Is Your Beer Really Craft? 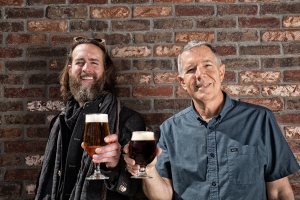 Stone Brewing’s Greg Koch announced his latest venture: True Craft, which aims to allow the ideals and creativity of craft beer to continue in perpetuity. Image via BeerGraphs.

With 99 percent of the 4,2000 breweries in the country now holding 12 percent of the beer market, compared to the 6 percent of five years ago, companies like Anheuser-Busch InBev have started to scoop up smaller craft breweries as a way to avoid losing customers and revenue. At first, this may seem like a win-win situation for both parties. The big companies get the revenue share from the craft ales while the craft breweries get wider distribution and more brand exposure. There are some significant cons, however, mostly in the form of craft brewers giving up majority ownership of their company. Many view this business maneuver as “selling out” and warn that craft brewing losing its creative soul. What other expansion and growth options are there, however, for small businesses who have reached the limits of bank loans and equity?

This is where Stone Brewing Company, and its co-founder Greg Koch, comes in. “There needs to be a different model: one designed to allow for the principles, the ideals, the ethos of craft beer to continue in perpetuity,” says Koch. True Craft, Koch’s $100 million dollar venture, is that model. With his new venture, he hopes to be able to help small breweries get the financial help they need without selling out to Big Beer.

There needs to be a different model: one designed to allow for the principles, the ideals, the ethos of craft beer to continue in perpetuity.

The devil is in the details, however, and the intricacies of the True Craft fund have yet to be released. The initial plan is for Stone Brewing Company and its unnamed partners to buy non controlling stock, no more than 25 percent, in interested breweries. Who will be running the fund, as well as where its headquarters will be, have not yet been divulged. It’s a bare bones proposal so far, but one which has piqued the interest of brewers and beer authorities alike. Some remain skeptical, but most are hopeful for what Greg Koch promises.

While it may just be a noble theory for now, True Craft could be exactly what the craft beer industry needs to continue its growth without losing its soul. Who knows, maybe we will see the final decline of Big Beer as we know it.

The press release for True Craft is included below.

ESCONDIDO, CA – Today Stone Brewing announces True Craft, a company established to invest in craft breweries which are dedicated to remaining true to the definition of craft beer. Representing camaraderie in the industry, True Craft will make minority investments in craft brewers while allowing those breweries to retain their independent soul and control.

“Some people start companies to sell out. Some start companies because they are compelled to follow their passion. True Craft is for the latter,” said Greg Koch, Stone CEO & co-founder. “Craft beer needs an alternative model to the one that requires founders to sell their company in its entirety. In a world in which there are constant forces toward homogenization and fitting in, I specifically want to foster a world of uniqueness, depth and character.”

Outspoken about their commitment not to sell out to Big Beer, the co-founders of Stone have been investigating an alternative that would provide financing and operational guidance to small brewers who might otherwise have few options to protect the passion, heart and soul of their company. A year and a half in the making, Stone will be participating in True Craft as a founding member. The new venture has received an initial $100,000,000 brought forth from an investor group committed to the long term model. True Craft will welcome a handful of the best craft brewers in the business alongside Stone Brewing. Each brewery may participate in True Craft and in turn the company will provide minority investments to its members with minimal stipulations. All breweries will be aligned in the philosophical mindset of banding together to preserve craft while retaining full soul and control of their businesses for years to come.

“This is about setting up a consortium so we can not just survive, but continue to thrive in a world in which craft is being co-opted by Big Beer,” said Steve Wagner, Stone President & co-founder. “This allows companies like Stone to follow an ethos that involves independence and passion for the artisanal. By investing in True Craft now, we can be confident that our vision is locked in beyond our professional lifetimes and we feel privileged to help others in our industry do the same.”

True Craft’s detailed structure is still in formation and will be announced at a later date.

Founded by Greg Koch and Steve Wagner in 1996, San Diego-based Stone Brewing is the 10th largest craft brewer in the United States. Stone has been listed on the Inc. 500 | 5000 Fastest Growing Private Companies list 11 times,and has been called the “All-time Top Brewery on Planet Earth” by BeerAdvocate magazine twice. The multifaceted company will be the first American craft brewer to independently build, own and operate a brewery in Europe, and is also building a production brewery and destination restaurant in Richmond, Virginia. Brewing at both locations will be underway in summer 2016. Known for its bold, flavorful and largely hop-centric beers, Stone has earned a reputation for brewing outstanding, unique beers while maintaining an unwavering commitment to sustainability,business ethics, philanthropy and the art of brewing. For more information on Stone Brewing, please visitstonebrewing.com or the company’s social media sites: Facebook, Google+, Instagram, Pinterest, Twitter and TheStone Blog.