Fans of craft beer who live on the East Coast will be happy to hear the news that several well-known West Coast craft breweries are setting up shop in the area.

Ballast Point, based in San Diego, recently announced that it was building a factory and tasting room near Roanoke, Virginia. The company sees the area as a perfect place to grow its business, as state leaders have actively worked to recruit breweries. Governor Terry McAuliffe even traveled to San Diego to speak with craft beer leaders about why they should consider moving east. Botetourt County, the Roanoke Regional Partnership, the Virginia Economic Development Partnership have all paved the way for breweries to come to the region, and tax incentives and grants make the move hard to pass up.

Ballast Point will be in the same neighborhood as Deschutes, which is an Oregon-based brewery that’s also building a brewery in Roanoke. After being founded in 1988, its distribution area now reaches across the nation. It makes sense to have a production facility on the East Coast to make it easier to get their customers their favorite drinks in an efficient way.

Another San Diego-based company, Green Flash, has made the move east, putting down roots in Virginia Beach. Set to open in the summer of 2016, the facility will include a production area, a tasting room, and a beer garden. The brewery will roll out the Sea to Sea Lager to help mark its expansion. 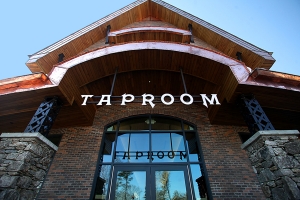 Established West Coast craft breweries like Sierra Nevada and Green Flash are moving to the East Coast to open brewing facilities in North Carolina and Virginia. Image via Sierra Nevada.

Stone Brewing, founded in Escondido and currently one of the largest breweries in Southern California, will also be growing its reach by building a site in Richmond. It will entail a brewery, restaurant, and beer garden, where customers can enjoy some of the dozens of beers they’ll be serving.

Other breweries who are part of this movement to the Atlantic include New Belgium, which built a brewery in Asheville in 2016, Sierra Nevada, which operates a taproom and restaurant in Mill River, NC, and Oskar Blues, which is expanding its existing brewery and tasting room in Brevard, NC.

With the exploding popularity of craft beer across the country, breweries are expanding to keep up with demand. The beers many west coast breweries are known and loved for are hoppy beers such as IPAs and Pale Ales, which are best enjoyed fresh as the hop aroma and quality degrades over time. In order to get the hoppy beers from the West Coast to craft beer fans out east, the beer must be delivered in freight trucks and driven across the country. Although many of the freight trucks are temperature-controlled, the amount of time it takes to deliver beer to distributors out East, and for distributors to get the beer to local accounts, and for local accounts to put the beer on shelves or draft lines does degrade the quality. By establishing facilities on the East Coast, breweries will be able to get fresher beer to their fans, faster, and save money on freight in the process.

On top of that, it spreads some beer love to craft beer connoisseurs who live east of the Mississippi. No longer do they have to plan trips out west to California, Oregon, and Colorado to get an inside glimpse of how renowned brews are made. Instead, they can plan a road trip to hit up breweries closer to home, enjoy freshly brewed beers, and support their local economies.