If you’re into craft beer, especially IPAs, you’ve probably drunk a brew or six that had an IBU measurement listed on the bottle. You may have some foggy idea that this number is supposed to be a measure of hoppiness or bitterness, but not know anything more than that. Many casual drinkers have no idea what an IBU is, or that the measurement is one of the most controversial topics in the controversy-loving craft beer world. This guide will set you straight.

So What Is An IBU? 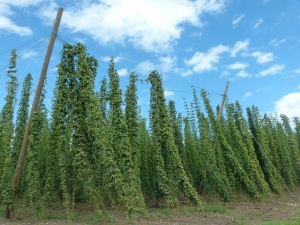 IBU stands for International Bittering Unit, the unit is designed to be an empirical measurement of how bitter a beer is. Beer gets its bitterness from hops, which grow vertically on vines.

IBU stands for International Bittering Unit, the unit is designed to be an empirical measurement of how bitter a beer is. Specifically, one IBU is one part-per-million of isohumulone, the main compound responsible for beer’s bitterness. Isohumulone is released when hops are broken down during the boil stage of the brewing process.

How Are IBUs Measured?

This is where things start to get controversial. There is a lab test that can determine the exact isohumulone level in a given beer, but most craft breweries don’t ship their product to a lab to get tested. Instead, they use imprecise calculations based on their brewing recipe. There’s no one calculation method that’s universally accepted, so the alleged IBU on most beers are a ballpark figure at best.

Can I Use IBUs To Tell How Bitter A Beer Will Be?

Unfortunately, you can’t just read a number on a label to know how bitter a beer will taste. That’s because perceived bitterness is a combination of the taste of isohumulone with malt sweetness, yeasty notes, esters, and other flavor components. There’s a good chance you can taste one beer rated at 40 IBUs and experience as more bitter than one rated at 60 that has more malt character. You also can’t use this measurement to determine how hoppy a beer will be, because hops impart many more flavor notes than just bitterness. An IBU count will tell you nothing about floral or citrusy hop flavors.

Who Is The IBU Measurement For If It Won’t Tell Me How My Beer Will Taste?

The IBU is most useful as a quality control measurement for craft breweries. Since it is an empirical analysis of the exact chemical content of a beer, brewers can use IBU lab tests to make sure that they’re giving customers the same exact product from week to week. Since most of us want to know that if we buy a specific beer it’ll taste the same as the last time we had it, that means this oft-maligned measurement is good for beer nerds after all!

The Resurgence of Nitro Beers

Everything You Need to Know About India Pale Lagers (IPL)